What Movie Makes John Cena Cry Like a Baby?

Dolittle star John Cena shares the movie that makes him ugly cry and gets us excited for his new film with Jackie Chan.

WinXVideos Lenovo
a list of 32 titles
created 16 hours ago 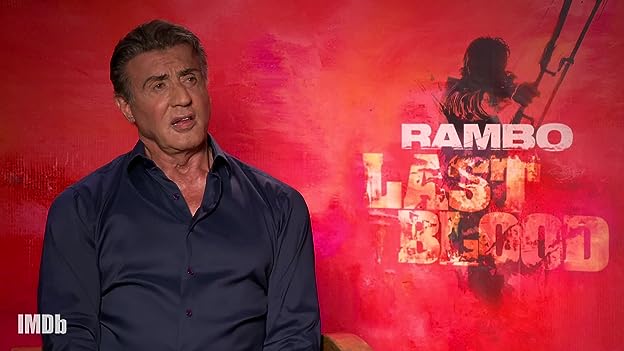 IMDb sits down with the cast of Rambo: Last Blood to find out if a certain '90s holiday movie inspired the film and who they think Rambo should team up with.

In Thailand, John Rambo joins a group of mercenaries to venture into war-torn Burma, and rescue a group of Christian aid workers who were kidnapped by the ruthless local infantry unit.

Rambo mounts a one-man mission to rescue his friend Colonel Trautman from the clutches of the formidable invading Soviet forces in Afghanistan.

Rambo returns to the jungles of Vietnam on a mission to infiltrate an enemy base-camp and rescue the American POWs still held captive there.

A veteran Green Beret is forced by a cruel Sheriff and his deputies to flee into the mountains and wage an escalating one-man war against his pursuers.

Mike Banning is framed for the attempted assassination of the President and must evade his own agency and the FBI as he tries to uncover the real threat.

An over-the-hill hitman faces off against a younger clone of himself.

An augmented human and Sarah Connor must stop an advanced liquid Terminator, from hunting down a young girl, whose fate is critical to the human race.

Astronaut Roy McBride undertakes a mission across an unforgiving solar system to uncover the truth about his missing father and his doomed expedition that now, 30 years later, threatens the universe.

Columbus, Tallahassee, Wichita, and Little Rock move to the American heartland as they face off against evolved zombies, fellow survivors, and the growing pains of the snarky makeshift family.

Beneath Anna Poliatova's (Sasha Luss') striking beauty lies a secret that will unleash her indelible strength and skill to become one of the world's most feared government assassins.

Almost four decades after they drew first blood, Sylvester Stallone is back as one of the greatest action heroes of all time, John Rambo. Now, Rambo must confront his past and unearth his ruthless combat skills to exact revenge in a final mission. A deadly journey of vengeance, RAMBO: LAST BLOOD marks the last chapter of the legendary series.

They Drew First Blood. He Will Draw Last. See more »

The plot to this movie was intended for Rambo (2008) but changed. It was also partially used for Homefront (2013) with Jason Statham. See more »

Many of the driving shots are obviously filmed against the green screen as the dirt on the windshield and edges of people's hair has an unnatural blue-gray tint. See more »

[from trailer]
Rambo: [narrating] I've lived in a world of death. I've watched people I've loved die. Some fast with a bullet, some not enough left to bury. All these years I've kept my secrets, but the time has come to face my past. And if they come looking for me, they will welcome death. I want revenge. I want them to know that death is coming. And there's nothing they can do to stop it.
See more »

The end credits show a montage of scenes from all five movies, and ends with Rambo getting up from his seat, then riding off on a horse into the sunset. See more »

Q: I saw this at the cinema and there seems to be at least half the film is in Spanish without subtitles. Is that right or is it just the version I saw? I
See more »

OK, so I have to admit: I can't help but love Sly Stallone. The guy just keeps coming back succesfully, against all odds. Who would have thought that he could pull off another Rambo flick at age 73? Well, I'm glad he did, because besides Liam Neeson, Denzel Washington and Mel Gibson, who are we gonna turn to for some old school, old-man-on-a-revenge-spree flick?

I was a big fan of First Blood, but didn't care so much for the second (too cartoonish) and third (too friggin' awful) installments. The fourth however, was just amazing. A slow build up, a suspenseful breakout and then cathartic violence. That last action sequence, where Rambo goes totally berserk and makes minced meat out of a whole army, I mean, come on, that was awesome.

The fifth Rambo is a little different in that it is more of a generic revenge flick in its setup. But only in its setup though. As soon as Rambo starts maiming and killing, this movie goes so far over the top you can't help but cheer him on. This is one bloody movie. Last blood it may be, but it is many a full bucket of it.

I also like how Rambo is more vulnarable in this flick. Stallone gets to use more of his acting chops in this one.

I know it's a lot to ask, and maybe I shouldn't even hope for it, but damn it, I sure would like another one of these.

Catch Me If You Can
The Outsiders
La La Land
Ghost
What's Eating Gilbert Gr...